In this post, I give a simple model for temperature anomaly for data from 1850 to 2013.  The temperature anomaly data is the land and ocean series from Berkeley Earth; the sunspot data is the old monthly averages of daily sunspot numbers from the Royal Observatory in Belgium; and the CO2 data come from two series of the NOAA ESRL, one series – using ice cores – is of yearly CO2 levels from 1850 to 1958 and the other of monthly levels from the Mauna Loa Observatory in Hawaii from March of 1958 to 2013.  I created a time series out of the two CO2 series by adding the seasonal components to each yearly point in the earlier series, where the seasonal components are found using the later series.  I then filtered the combined series with a linear filter 129 months wide.  I also tried a filter width of 12 months, but the results were essentially the same.  I smoothed the CO2 data because the seasonal variation for the CO2 data is local to Hawaii and the other data is global..  The first sunspot observation is associated with the fourth temperature anomaly observation and the fourth CO2 observation, since I have observed that temperature anomaly is lagged three months behind sunspot number, in terms of correlation. 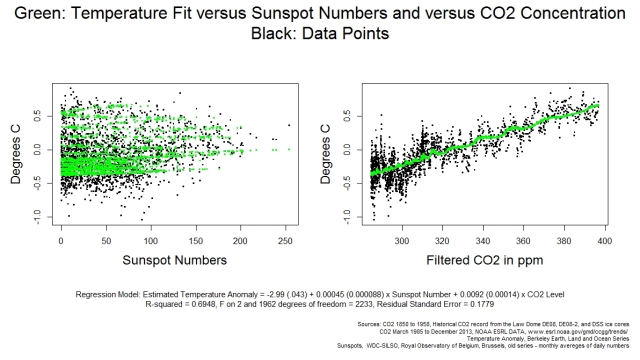 Together, the two variables, sunspots and CO2 account for about 70% of the variation in temperature anomaly, where variation is measured by sums of squares. The regression indicates an increase of 0.045 degrees C for every 100 more sunspots and an increase of 0.92 degree C for every 100 ppm increase in the level of CO2.  The fit does agree with the last ten years of the hiatus in temperature growth (Actually it does not.  I thought it did.)  . 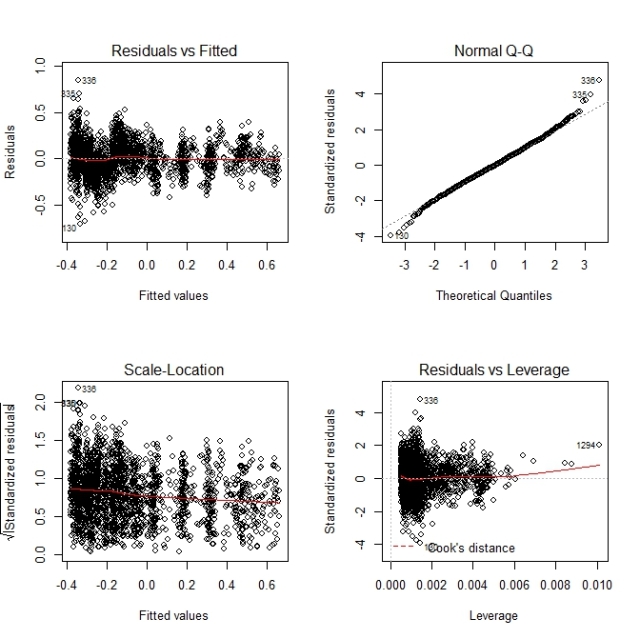 This is a very simple model, and does not account for other greenhouse gases or other component of the atmosphere, or the composition of the different places on the earth. That said, temperature is a measure of energy, they are linearly related.  So using sunspots which, for the data we have, are a good proxy for energy density from the sun, makes sense.  I do not know enough physics  to say if the energy returned to the earth by greenhouse gases is linearly related to greenhouse gas concentration, but the plots indicate probably yes.