The greenhouse effect drives the temperature increase we have seen at the global level over the last 140 years.  Below is a pdf of an power point presentation that I created for a local town hall on environmental issues.  I look at sunspots, an ENSO index, and carbon dioxide levels.  All three are important, but CO2 has the strongest correlation to temperature.  I do some plots and fit an arima model. 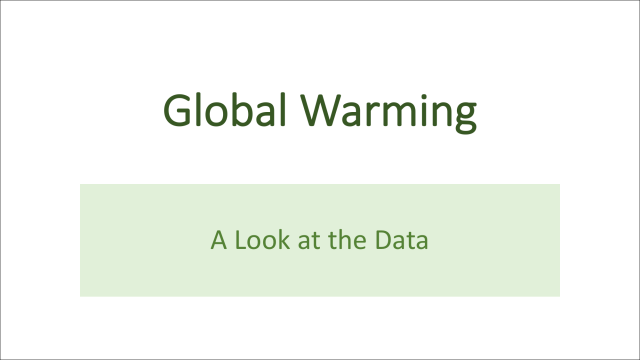 I start this blog post with a plot of the sunspot and temperature anomaly data that I have been using.  The data is from 1850 to 2013. 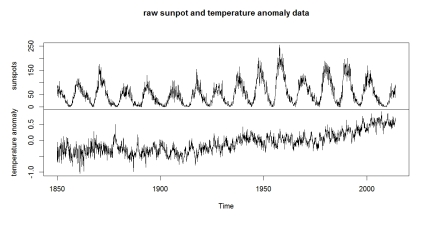 I have found the source of my temperature anomaly data – at Berkeley Earth – the data is the monthly global average temperature data for land and ocean, http://berkeleyearth.org/data.  It took several hours of searching.

In my first graph of this blog I plot the graph of the last blog using a period of 129 months for the sunspot cycle.  To choose the period, I used the F test from Fuller’s Introduction to Time Series, 1976, Wiley, p.282 to compare different periods close to 132.  The period of 129 had the largest F value.  The period is 10 years and 9 months. 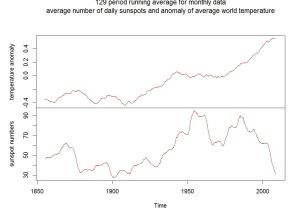 The second graph I put up is of two plots.  The first plot is of the temperature anomaly shown above along with a curve of predicted values, where the predictions are from the model generated by the regression of the 88th through 922th observations of the temperature anomaly vector on the 1st through the 835th observations of the sunspot vector.  The model has the largest R squared of the several hundred single variable lag models at which I looked.  The best fitting model was for a lag of 87 months fitting 835 observations.

The second plot is the difference between the two curves in the first plot.

This is a very simple model.  I was surprised by the drop in the differences in the 1950’s and early 1960’s, but the trend is of an increasing difference as time goes on.

In this blog post, I have uploaded  a graph of the running average over 132 months (11 years) of the average number of daily sunspots per month as found by the Royal Observatory of Belgium Av. Circulaire, 3 – B-1180 Brussels, Belgium and the running average over 132 months of the global average temperature anomaly taken from a source I have lost and cannot find.  I believe the temperature anomalies are for air temperature over the ocean.  The years are 1850 to 2013.  I created the graph. 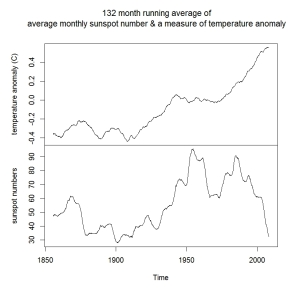 From 1855 to 1900, it appears that changes in the temperature anomaly follow the sunspot numbers by a year or two.  And temperatures loosely increased as sunspots increased but not like from 1855 to 1900.  By the average at 2008 there was no connection.

The source of just about all heat coming into this planet is the sun.  Sunspots appear to be related to the solar flux, more sunspots correlate with a denser flow of energy, so one would expect the temperature of the earth to correlate with the sunspots.

I tried to take out the cycle of the sun spots and focus on the level of sunspot activity by taking a running average of the observations over the approximately 11 year sunspot cycle.  The averages run from July of 1855 to June of 2008.

The plots indicate to me that there is more to global temperature than the sunspot cycle over the years for which we have data.